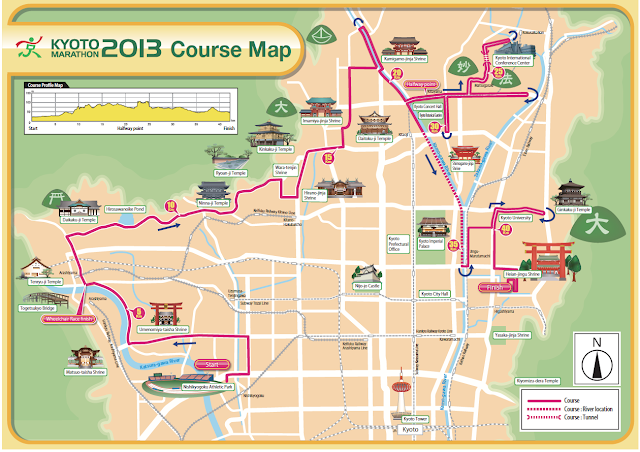 I'm way overdue for a race report for the 2013 Kyoto Marathon which happened on March 10th, over three months ago! I'm not sure if my delay describing my race experience here was some version of writer's block or getting a spring season cold or getting wrapped up in what is going on in the world. Who knows [shrugs shoulders]? But luckily I wrote in my travel diary after the race so I have something with which to stir up my memory.

After nearly a week in Tokyo I arrived by the famed bullet train, using my two-week JR Pass, to Kyoto a little before Ayako on the Friday before the race. I got there early so I could do some sightseeing in the city of Kyoto, which was the capital of Japan from 794-1868 ("kyo" in both the city's names, meaning "capital"). I connected with some new friends, and we took a bus up to Kamigamo Shrine, which is one of the seven UNESCO World Heritage Sites that would be along the race course on Sunday. 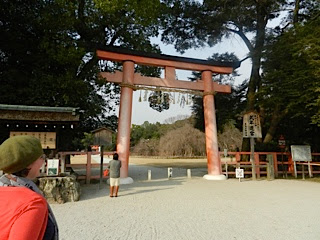 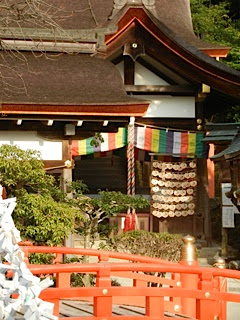 On Friday night there was a festival of lights at the Yasaka Shrine which included street food, giant lit-up flower arrangements, and lit-up sculptures made by local art students. After trying some Takoyaki (octopus dumpling balls) and walking around the shrine and park I called it a night.

Saturday morning, the day before the race, Ayako and I ventured out of our hotel, the Kyoto Royal Hotel & Spa, which was really nice and in a great location, and a short proximity (25 or so minute walk) to the race expo and what would be the finish area. 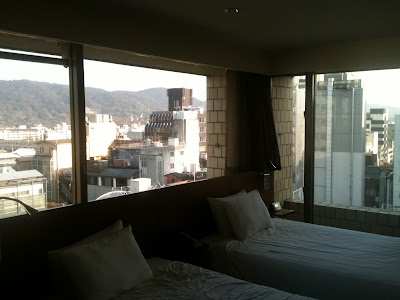 Room with a View

We picked up our bibs at the race expo and spent the rest of the day relaxing. There are actually quite a few Italian restaurants in Kyoto, so after the first one we tried to go to was closed for a wedding (nooooo!) we found another one a couple of blocks away (hurray!). We were able to do some classic carbo-loading the night before the race. 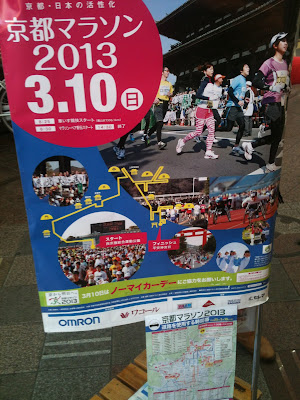 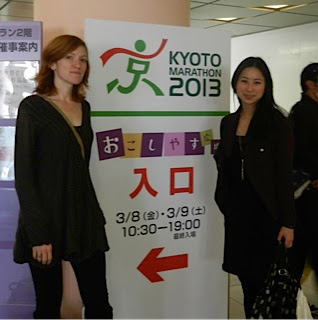 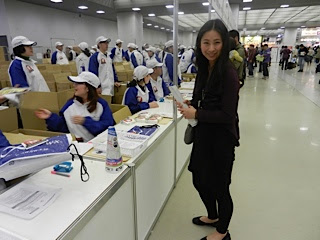 Our alarms went off at 5 a.m. I had a bean bun (a pastry filled with a thick, sweet bean paste) and some coffee for breakfast. We both had our game faces on. On the train to the start of the race there were a lot of runners and a few people heading home from partying all night. I always wonder what these folks are thinking when they see gaggles of excited runners on their way to run 26+ miles. A train or bus full of the scent of muscle rub probably doesn't smell so good after a night of heavy drinking.

There were about 15,000 runners in this race and it looked like a lot of people when walking up to the Nishikyogoku Athletic Stadium where the starting line was. The baggage system was similar to that of the NYC marathon: numbered trucks at the start, collecting the bags which would then be delivered to the finish area at Heian Shrine. 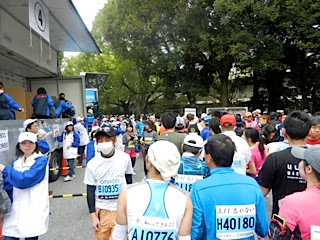 Runners at the baggage area near the start

We got a picture of ourselves in the matching arm warmers we found at a sports store in Tokyo. This was great because you never know how you're going to feel about posing for a picture after the race. 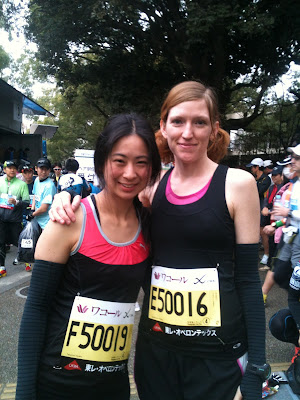 The race started on the track at the stadium, to the cadence of loud drumming. I was surprised at how quiet everyone was in the stands and wondered if this was the Japanese way of viewing races (with serious expressions, sitting in bleachers), but I was relieved when we left the stadium that out on the road there were crowds of people being boisterous and festive. I couldn't understand a word of what anyone was saying, but there was a lot of banter back and forth between runners and people celebrating on the sidelines and people were laughing and having a really good time. So I was too.

It was muggy in the beginning of the race and I was sweating a lot and I made sure to grab water at all the water stations, skipping the sports drinks because they are usually too sweet and make me nauseous. Then about an hour into the race the sky broke and it started pouring down rain. And I mean hard! Later, Ayako told me that she was hearing a lot of cursing around her (there must have been a lot around me too, but I couldn't translate it). Just as suddenly as it started, it stopped, but that wouldn't be the last rain we'd see for the day (death march: dun dun dun dun...).

I would like to be able to describe the lovely scenery of Kyoto. The race was a loop inside the town past several shrines and temples, surrounded by mountains. How majestic! But when I am running I have a difficult time looking around me. I am usually looking straight ahead, thinking about the person in front of me or about what I'm going to eat afterwards. This race was very crowded, perhaps the most crowded race I've ever done, so in this case I was really thinking about the people in front of me and trying not to trip anyone. There were a lot of stunning running outfits; the runners in Japan are fashionable and very color-coordinated. The women wear a lot of pink. I was really impressed with the support along the course. There were lots of people yelling encouragement including many children and one large group of monks! 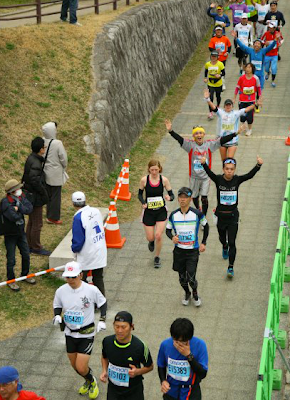 Can you spot me?

The course for the race was very hilly. At mile 15 there was a long, steep hill that I wasn't expecting. Fortunately I kept running and passed the time by looking at the runners coming from the other direction (this was one of the short out-and-backs along the course). I looked for Ayako who had surged ahead when the horn went off at the beginning. Going back down the hill at this point was a little painful.

I felt really good overall until about mile 22. At about the 34 Km mark we ran along a dirt path beside the Kamo-gawa River and this felt extraordinarily good on my legs. The crowd thinned out a little too. When we crossed a bridge to run along the other side of the river I noticed the runners getting really quiet. I could tell everyone was concentrating really hard at this point. I noticed a few slowing to a walk or stopping to stretch. It's these sorts of moments in the race that I feel the most camaraderie; I'm struggling but so is everyone else and I know because we all share the same expression.

I saw Ayako finally at the last out-and-back and jumped up and down and yelled "Fight-o!" which is the Japanese cheer for "Fight!" We were almost done! And seeing her gave me the last boost of adrenalin I needed to complete the race.

The race ends at Heian Shrine, which is marked with a giant red torii gate. I thought we were going to run underneath it but I don't think we did or at least I don't remember if we did or not. That's how tired I was in that moment. In the end it started to rain again and there were so many runners walking like zombies to the baggage area that it took forever to get there. I got extremely cold and had only the finisher's towel they hand you at the end to keep me warm and dry for over half and hour. Ayako was able to find the heated changing room where people were drying off and changing into warmer clothes, but I picked up my bag and kept walking (albeit slowly) all the way back to the hotel where I took one of the best showers of my life. 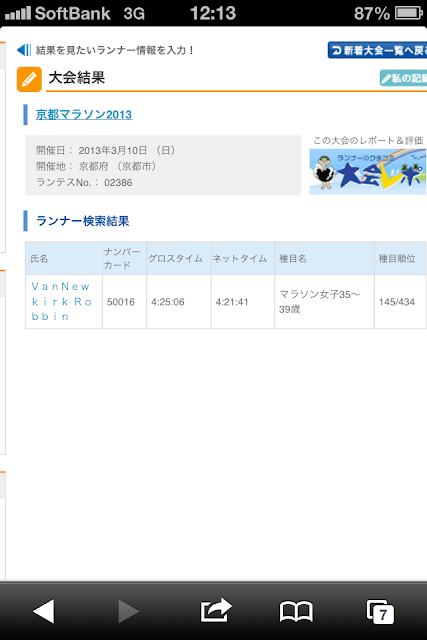 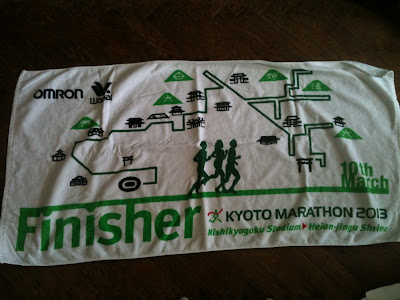 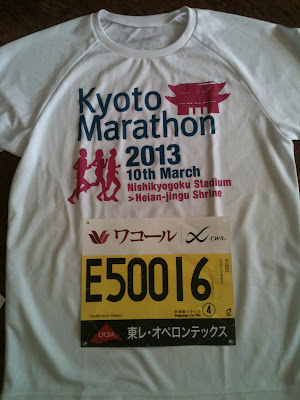 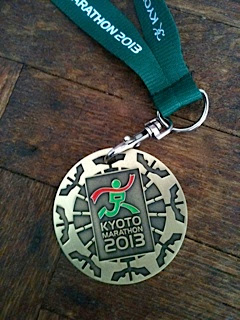 We celebrated by hanging out in our pajamas a lot. Then we had dinner at a wonderful restaurant in the Pontocho area of the old geisha district. Our meal consisted of fresh vegetables that we grilled ourselves on a hot grill built right into the middle of our table. We also had a fresh, creamy block of tofu in some broth. In Japan tofu isn't treated as a sad meat substitute only for vegetarians, but instead it's an artistic and delicious block of soft soy creamy goodness. I should write food reviews, no? 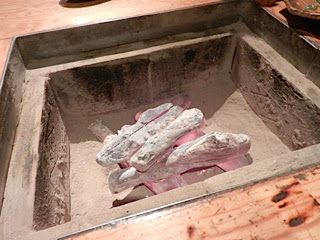 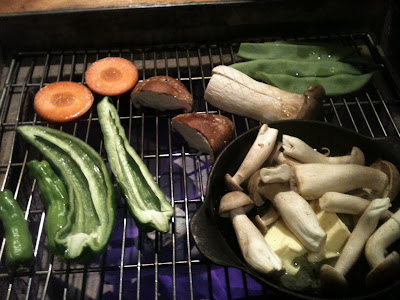 Robbin
I started this blog while training for the Two Oceans Marathon in Cape Town in 2012, and this year I completed the Kyoto Marathon in Japan. I would like to run a marathon on all seven continents. I'm a southerner living in Brooklyn, an outdoors enthusiast trekking in an urban landscape.